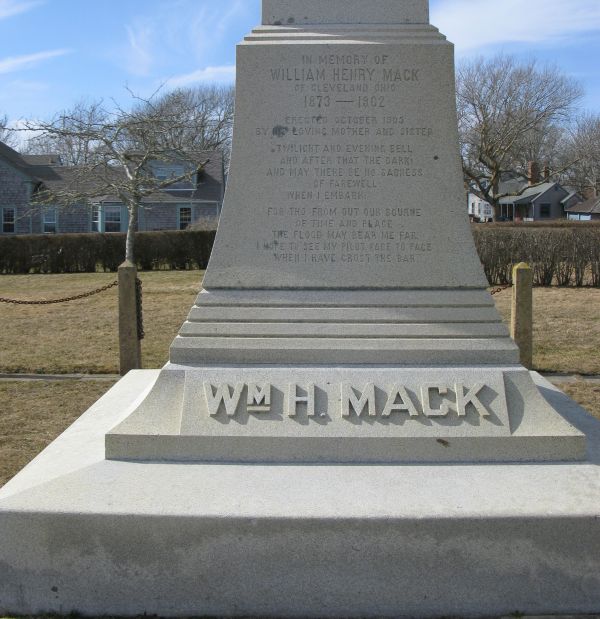 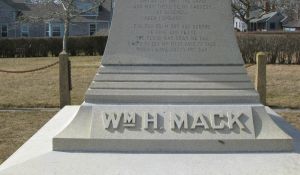 The Mack Memorial is located next to the Coast Guard Station and Lighthouse. The Monument was erected in 1903 by the family of William Henry Mack, the owner of the barge Wadena, in memory of the owner and crew who were lost, and the seven men of Monomoy Life-Saving Station who were drowned trying to rescue them. There was only one survivor among the eight U.S. Life-savers who rowed their lifeboat out to the ship in distress. This failed rescue attempt became known as “The Monomoy Disaster”.

All the names of the drowned men are inscribed, as well as the third and fourth stanzas of the poem “Crossing the Bar” by Alfred Lord Tennyson.

In March 1902, the barge Wadena was one of two ships stranded at Shovelful Shoals, just east of Monomoy Point. The crews of both ships were rescued by the surfmen of Monomoy Life-Saving Station, one of three Stations located in Chatham at that time. However, the ships' crews returned in the following days to try to salvage them by lightening their loads of coal. A northeast gale stranded five men, including its owner, on the Wadena, and on March 17, 1902, Captain Marshall Eldredge and seven surfmen of the Monomoy Life-Saving Station went out in response to a distress signal on the Wadena. One of the surfmen was Seth L. Ellis, the sole survivor, who later recounted the story in the book “The Lifesavers of Cape Cod” by J. W. Dalton. Some of what Ellis said was:

In order to clear the line of breakers that extended from the stern of the barge so that we could lay a good course for the shore, a part of the surfmen were backing hard on the port oars, while the others gave way with full power on the starboard side. Before we could get the boat turned around a big wave struck us with fearful force, and quite a lot of water poured into the surf-boat.

...As soon as the water came into the boat, the rescued men jumped up, and becoming panic-stricken, threw their arms about the necks of the surfmen so that none of us could use our oars. The seas, one after another, struck us, and the boat, filling with water, turned bottom up throwing us all into the raging sea. The seas kept striking us after the boat upset, and we were soon in among the heaviest breakers. Twice we righted the boat, but the seas which struck her, before we could get into her, capsized her each time.

The cold and rough seas washed all away from the capsized lifeboat, except Ellis, who was able to remain clinging to the drifting boat. He was rescued by Captain Elmer F. Mayo, who rowed a dory from the other stranded barge to save Ellis. According to the Dalton book, Seth Ellis also observed -

As I have often said, “If the persons we took off the barge had kept quiet as we told them to, all hand would have been landed in safety.”