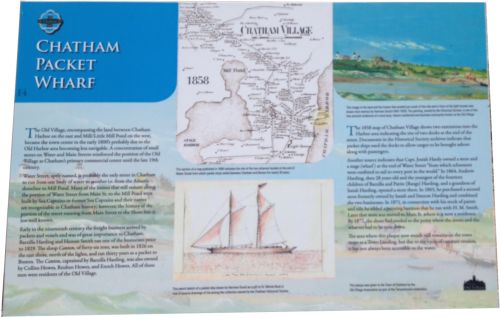 The Old Village, encompassing the land between Chatham Harbor on the east and Mill/Little Mill Pond on the west, became the town center in the early 1800's probably due to the Old Harbor area becoming less navigable. A concentration of small stores on Water and Main Streets reinforced the position of the Old Village as Chatham's primary commercial center until the late 19th century.

Water Street, aptly named, is probably the only street in Chatham to run from one body of water to another, i.e. from the Atlantic shoreline to Mill Pond. Many of the homes that still remain along the portion of Water Street from Main Street to the Mill Pond were built by Sea Captains or former Sea Captains and their names are recognizable in Chatham history; however, the history of the street running from Main Street to the Shore line is less well known.

Early in the nineteenth century the freight business arrived by packets and vessels and was of great importance to Chatham. Barzilla Harding and Heman Smith ran one of the businesses prior to 1829. The sloop Canton, of fourty-six tons, was built in 1826 on the east shore, north of the lights, and ran thirty years as a packet to Boston. The Canton, captained by Barzilla Harding, was also owned by Collins Howes, Reuben Howes, and Enoch Howes. All of these men were residents of the Old Village.

The 1858 map of Chatham Village shows two extensions into the Harbor area indicating the site of two docks at the end of the street. Documents in the Historical Society archives indicate that packet ships used the docks to allow cargo to be brought ashore along with passengers.

Another source indicates that Captain Josiah Hardy owned a store and a stage (wharf) at the end of Water Street “from which schooners were outfitted to sail to every port in the world.” In 1864, Andrew Harding, then 28 years old and the youngest of the fourteen children of Barzilla and Pattie (Bangs) Harding, and a grandson of Isaiah Harding, opened a store there. In 1865, he purchased a second store formerly owned by Isaiah and Simeon Harding and combined the two businesses. In 1871, in connection with his stock of paints and oils, he added a painting business that he ran with H. M. Smith. Later that store was moved to Main St. where it is now a residence. By 1872, the shore had eroded to the point where the stores and the wharves had to be torn down.

The area where this plaque now stands still remains on the town maps as a Town Landing, but due to the cycle of constant erosions, it has not always been accessible to the water.