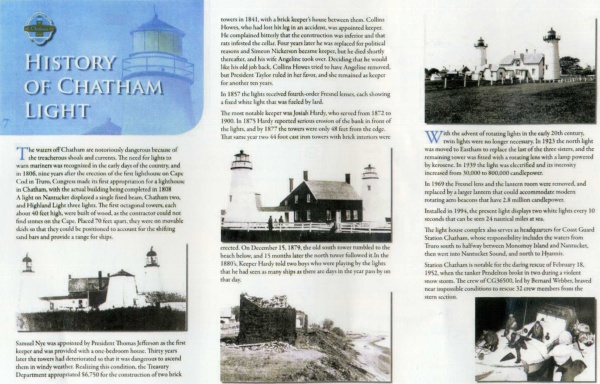 The waters off chatham are notoriously dangerous because of the treacherous shoals and currents. The need for lights to warn mariners was recognized in the early days of the country, and in 1806, nine years after the erection of the first lighthouse on Cape Cod in Truro, Congress made its first appropriation for a lighthouse in Chatham, with the actual building being completed in 1808. A light on Nantucket displayed a single fixed beam, Chatham two, and Highland Light three lights. The first octagonal towers, each about 40 feet high, were built of wood, as the contractor could not find stones on the Cape. Placed 70 feet apart, they were on movable skids so that they could be positioned to account for the shifting sand bars and provide a range for ships.

Samuel Nye was appointed by President Thomas Jefferson as the first keeper and was provided with a one-bedroom house. Thirty yeasr later the towers had deteriorated so that it was dangerous to ascend them in windy weather. Realizing this condition, the Treasury Department appopriated $6,750 for the construction of two brick towers in 1841, with a brick keeper's house between them.Collins Howes, who had lost his legin an accident, was appointed keeper. He complained bitterly that the construction was inferior and that rats infested the cellar. Four years later he was replaced for political reasons and Simeon Nickerson became keeper, but he died shortly thereafter, and his wife Angeline took over. Deciding that he would like his old job back, Collins Howes tried to have Angeline removed, but President taylor ruled in her favor, and she remained as keeper for another ten years.

In 1857 the lights received fourth-order Fresnel lenses, each showing a fixed while light that was fueled by lard.

The most notable keeper was Josiah Hardy, who served from 1872 to 1900. In 1875 Hardy reportde serious erosion on the bank in front of the lights, and by 1877 the towers were only 48 feet fom the edge. That same year two 44 foot cast iron towers with brick interiors were erected. On December 15, 1879, the old south tower tumbled to the beach below, and 15 months later the north twoer followed it. In the 1880's, Keeper Hardy told two boys who were playing by the lights that he had seen as many ships as there are days in the year pass by on that day.

With the advent of rotating lights in the early 20th century, twin lights were no longer necessary. In 1923 the north light was movd to Eastham to replace the last of the three sisters, and the remaining tower was fitted with a rotating lens with a lamp powwered by kerosene. In 1939 the light was electrified and its intensity increased from 30,000 to 800,000 candlepower.

In 1969 the Fresnel lens and the lantern room were removd, and replaced by a larger lantern that could accommodate modern rotating aero beacons that have 2.8 million candlepower.

Installed in 1994, the present light displays two white lights every 10 seconds that can be seen 24 nautical miles at sea.

The light house complex also serves as headquarters for Coast Guard Station Chatham, whose responsibility includes the waters from Truro south to halfway between Monomoy Island and nantucket, then west into Nantucket Sound, and north to Hyannis.

Station Chatham is notable for the daring rescue of February 18, 1952, when the tanker Pendleton broke in two during a violent snow storm. The crew of the CG36500, led by Bernard Webber, braved near impossible conditions to recue 32 crew members from the stern section.