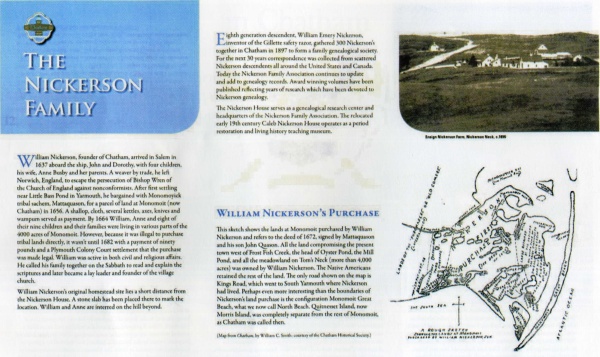 William Nickerson, founder of Chatham, arrived in Salem in 1637 aboard the ship, John and Dorothy, with four children, his wife, Anne Busby and her parents. A weaver by trade, he left Norwich, England to escape the persecution of Bishop Wren of the Church of England against nonconformists. After first settling near Little Bass Pond in Yarmouth, he bargained with Monomoyick tribal sachem, Mattaquason, for a parcel of land at Monomoit (now Chatham) in 1656. A shallop, cloth, several kettles, axes, knives and wampum served as payment. By 1664 William, Anne and eight of their nine children and their families were living in various parts of the 4000 acres of Monomoit. However, because it was illegal to purchase tribal lands directly, it wasn't until 1682 with a payment of ninety pounds and a Plymouth Colony Court settlement that the purchase was made legal. William was active in both civil and religious affairs. He called his family together on the Sabbath to read and explain the scriptures and later became a lay leader and founder of the village church.

Eighth generation descendant, William Emery Nickerson, inventor of the Gillette safety razor, gathered 300 Nickerson's together in Chatham in 1897 to form a family genealogical society. For the next 30 years correspondence was collected from scattered Nickerosn descendants all around the United States and Canada. Today the Nickerson Family Association continues to update and add to genealogy records. Award winning volumes have been published reflecting years of research which have been devoted to Nickerson genealogy.

William Nickerson's Purchase
This sketch shows the lands at Monomoit purchased by William Nickerson and refers to the deed of 1672, signed by Mattaquason and his son John Quason. All the land compromising the present town west of Frost Fish Creek, the head of Oyster pond, the Mill Pond, and all the meadowland on Tom's Neck (more than 4,000 acres) was owned by William Nickerson. The Native Americans retained the rest of the land. The only road shown on the map is Kings road, which went to South Yarmouth where Nickerson had lived. Perhaps even more interesting than the boundaries of Nickerson's land purchase is the configuration Monomoit Great Beach, what we now call North Beach. Quitnesset Island, now Morris Island, was completely separate from the rest of Monomoit, as Chatham was called then.