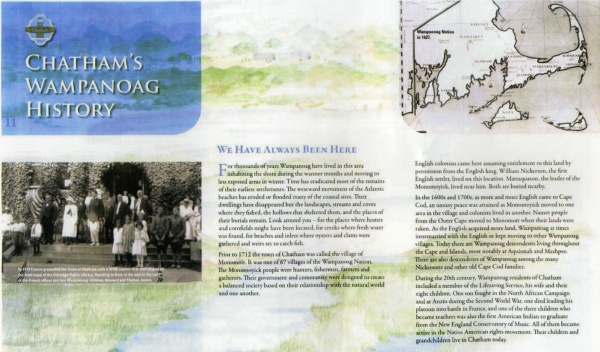 For thousands of years Wampanoag have lived in this area inhabiting the shore during the warmer months and moving to less exposed areas in winter. Time has eradicated most of the remains of their earliest settlements. The westward movement of the Atlantic beaches has eroded or flooded many of the coastal sites. Their dwellings have disappeared but the landscapes, streams, and coves where they fished, the hollows that sheltered them, and the places of their burials remain. Look around you - for the places where homes and cornfields might have been located, for creeks where fresh water was found, for beaches and inlets where oysters and clams were gathered and wiers set to catch fish.

Prior to 1712 the town of Chatham was called the village of Monomoit. It was one of 67 villages of the Wampanoag Nation. The Monomoyick people were hunters, fishermen, farmers, and gatherers. Their government and community were designed to create a balanced society based on their relationship with the natural world and one another.

English colonists came here assuming entitlement to this land by permission from the English king. William Nickerson, the first English settler, lived on this location. Mattaquason, the leader of the Monomoyick, lived near him. Both are buried nearby.

In the 1600s and 1700s, as more and more English came to Cape Cod, an uneasy peace was attained as Monomoyick moved to one area in the village and colonists lived in another. Nauset people from the Outer Cape moved to Monomoit when their lands were taken. As the English acquired more land, Wampanoag at times intermarried with the English or kept moving to other Wampanoag villages. Today there are Wampanoag descendants throughout the Cape and Islands, most notably at Aquinnah and Mashpee. There are also descendants of Wampanoag among the many Nickersons and other old Cape Cod families.

During the 20th century, Wampanoag residents of Chatham included a member of the Lifesaving Service, his wife and their eight children. One son fought in the North African Campaign and at Anzio during the Second World War, one died leading his platoon into battle in France, and one of the three children who became teachers was also the first American Indian to graduate from the New England Conservatory of Music. All of them became active in the Native American rights movement. Their children and grandchildren live in Chatham today.