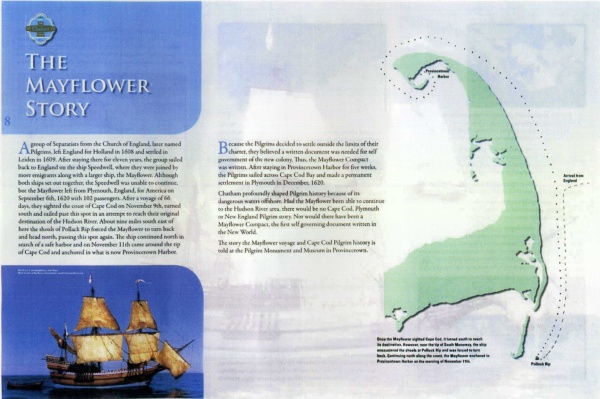 The Mayflower Story
Chatham Light Overlook
37 Main St.
Chatham, MA
A plaque located on Main Street at the parking area of the Lighthouse Beach Overlook tells the story of the Mayflower's encounter with the treacherous Chatham waters.

A group of Separatists from the Church of England, later named Pilgrims, left England for Holland in 1608 and settled in Leiden in 1609. After staying there for eleven years, the group sailed back to England on the ship Speedwell, where they were joined by more emigrants along with a larger ship, the Mayflower. Although both ships set out together, the Speedwell was unable to continue, but the Mayflower left from Plymouth, England, for America on September 6th, 1620 with 102 passengers. After a voyage of 66 days, they sighted the coast of Cape Cod on November 9th, turned south and sailed past this spot in an attempt to reach their original destination of the Hudson River. About nine miles southeast of here the shoals of Pollack Rip forced the Mayflower to turn back and head north, passing this spot again. The ship continued north in search of a safe harbor and on November 11th came around the tip of Cape Cod and anchored in what is now Provincetown Harbor.

Because the Pilgrims decided to settle outside the limits of their charter, they believed a written document was needed for self government of the new colony. Thus the Mayflower Compact was written. After staying in Provincetown Harbor for five weeks, the Pilgrims sailed across Cape Cod Bay and made a permanent settlement in Plymouth in December, 1620.

Chatham profoundly shaped Pilgrim history because of its dangerous waters offshore. Had the Mayflower been able to continue to the Hudson River area, there would be no Cape Cod, Plymouth or New England Pilgrim story. Nor would there have been a Mayflower Compact, the first self governing document written in the New World.

The story of the Mayflower voyage and the Cape Cod Pilgrim history is told at the Pilgrim Monument and museum in Provincetown.