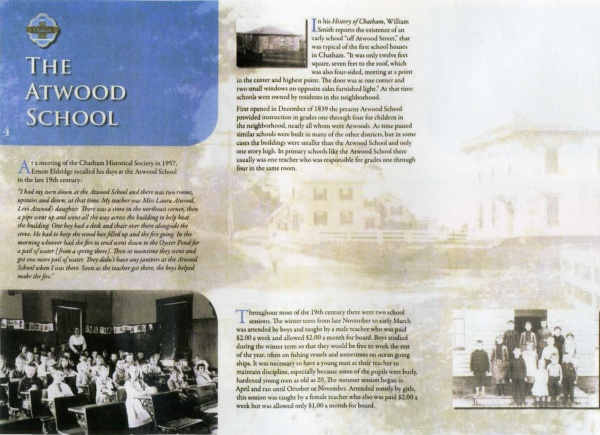 The Atwood School
Stage Harbor Rd.
Chatham, MA
A plaque located at the corner of Stage Harbor Road and Cedar Street, in front of the building that is currently Chatham's Scout Hall, tells the story of the Atwood School, located on what was formerly Atwood Street.

At a meeting of the Chatham Historical Society in 1957, Ernest Eldridge recalled his days at the Atwood School in the late 19th century:

\"I had my turn down at the Atwood School and was two rooms, upstairs and down, at that time. My teacher was Miss Laura Atwood, Levi Atwood's daughter. There was a stove in the northeast corner, then a pipe went up and went all the way across the building to help heat the building. One boy had a desk and chair over there alongside the stove. He had to keep the wood box filled up and the fire going. In the morning whoever had the fire to tend went down to the Oyster Pond for a pail of water [from a spring there]. Then at noontime they went and got one more pail of water. They didn't have any janitors at the Atwood School when I was there. Soon as the teacher got there, the boys helped make the fire.\"

In his History of Chatham, William Smith reports the existence of an early school \"off Atwood Street,\" that was typical of the first school houses in Chatham. \"It was only twelve feet square, seven feet to the roof, which was also four-sided, meeting at a point in the center and highest point. The door was at one corner and two small windows on opposite sides furnished light.\" At that time schools were owned by residents in the neighborhood.

First opened in December of 1839 the present Atwood School provided instruction in grades one through four for children in the neighborhood, nearly all of whom were Atwoods. As time passed similar schools were built in many of the other districts, but in some cases the buildings were smaller than the Atwood School and only one story high. In primary schools like the Atwood School there usually was one teacher who was responsible for grades one through four in the same room.

Throughout most of the 19th century there were two school sessions. The winter term from late November to early March was attended by boys and taught by a male teacher who was paid $2.00 a week and allowed $2.00 a month for board. Boys studied during the winter term so they would be free to work the rest of the year, often on fishing vessels and sometimes o ocean going ships. It was necessary to have a young man as their teacher to maintain discipline, especially because some of the pupils were burly hardened young men as old as 20. The summer session began in April and ran until October or November. Attended mostly by girls, this session was taught by a female teacher who was also paid $2.00 a week but was allowed only $1.00 a month for board.