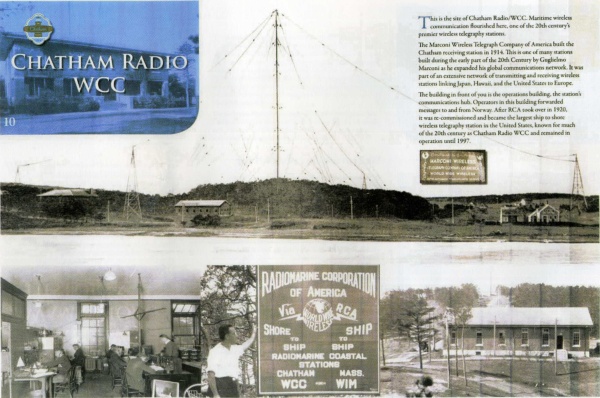 This is the site of Chatham Radio/WCC. Maritime wireless communication flourished here, one of the 20th century's premier wireless telegraphy stations.

The Marconi Wireless telegraph Company of America built the Chatham receiving station in 1914. This is one of many stations built during the early part of the 20th Century by Guglielmo Marconi as he expanded his global communications network. It was part of an extensive network of transmitting and receiving wireless stations linking Japan, Hawaii, and the United States to Europe.

The building in front of you is the operations building, the station's communications hub. Operators in this building forwarded messages to and from Norway. After RCA took over in 1920, it was re-commissiond and became the largest ship to shore wireless station in the United States, known for much of the 20th century as Chatham Radio WCC and remained in operation until 1977.