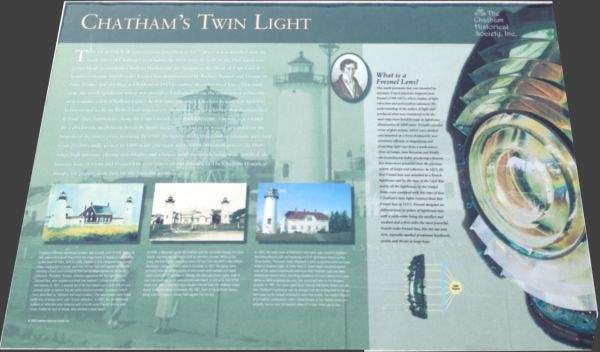 This lighthouse lantern room dates back to 1877, when it was installed atop the south tower of Chatham's twin lights, the third set to be built on the bluff known as James Head overlooking Chatham Harbor and the Atlantic at the elbow of Cape Cod. It houses a rotating fourth-order Fresnel lens manufactured by Barbier, Bernard and Tirenne of Paris, France and installed at Chatham in 1923 to replace an earlier fixed lens. (That same year, the north lighthouse tower was moved to Eastham, leaving the south tower to become, as it remains today, Chatham Light.) At that time, the single Chatham beacon was fueled by kerosene and its beam flashed four times every 30 seconds, a characteristic that distinguished it from other lighthouses along the Cape's treacherous backside coast. The lens was rotated by a clockwork mechanism driven by heavy weights that had to be wound upward from the bottom of the tower every morning. In 1939, the light was electrified and its intensity increased from 20,000 candle power to 1000 watts (the equivalent of 800,000 candlepower). In 1969, when high-intensity electric searchlights and a larger, more modern housing were installed, the historic lantern room and Fresnel lens were removed and donated to the Chatham Historical Society for preservation here on the Museum grounds.

What is a Fresnel Lens?
This multi-prismatic lens was invented by visionary French physicist Augustin Jean Fresnel (1788-1827), whose studies of light refraction and polarization advanced the understanding of the nature of light and produced what was considered to be the most important breakthrough in lighthouse illumination in 2000 years. Fresnel's circular array of glass prisms, which were stacked and mounted on a brass framework, was extremely efficient at magnifying and projecting light rays from a weak source (first oil lamps, later kerosene and finally the incandescent bulb), producing a beacon five times more powerful than the previous system of lamps and reflectors. In 1822, the first Fresnel lens was installed in a French lighthouse and by the time of the Civil War nearly all the lighthouses in the United States were equipped with this type of lens (Chatham's twin lights received their first Fresnel lens in 1857). Fresnel designed six different sizes or orders of lighthouse lens with a sixth-order being the smallest and weakest and a first-order the most powerful. Fourth-order Fresnel lens, like the one seen here, typically marked prominent headlands, points and shoals in large bays.